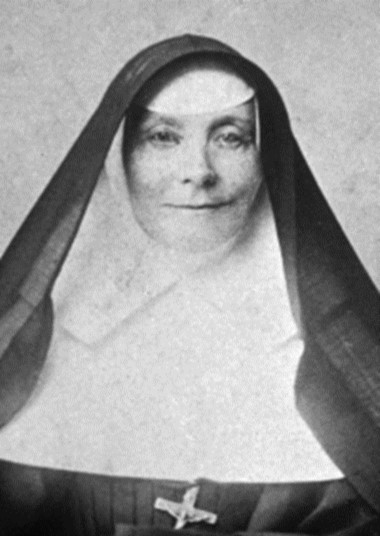 This year marks the 200th anniversary of the birth of Mother Mary Vincent (Ellen) Whitty, a milestone she shares with Queen Victoria; Prince Albert; writers Walt Whitman, Herman Melville and George Eliot as well as Christopher Sholes who devised the QWERTY keyboard system we still use today.

Ellen Whitty was born on 1 March 1819, in Poldharrigge, Co. Wexford and baptised the same day in Oylgate, near Enniscorthy. She was the fifth of seven children of Johanna (née Murphy) and William Whitty. Her older brother Robert became a Jesuit priest after having served several years within the Archdiocese of Westminster; a younger sister, Anne became a Sister of Mercy – Sister Mary Agnes.

Whilst the Brisbane Congregation of the Sisters of Mercy venerate Mother Vincent as their founder, she plays an important role within the wider Mercy community.

Catherine McAuley wrote to Frances Warde in Carlow on 6 January 1839 “…a new Sister was concluded for this day from Co. Wexford. She comes in a week…. Very pleasing and musical.” The postulant of whom she wrote was Ellen Whitty.

One of the last group of novices to be instructed by Catherine herself, Ellen professed her vows on 19 August 1841, just a couple of months before the death of Catherine. Her care of Catherine during her final days is well documented and it is to the young S.M. Vincent that we owe the accounts of Catherine’s final days by means of a series of letters S.M. Vincent wrote to M.M. Cecilia Marmion (Mistress of Novices), who was in Birmingham at the time.

In May1844, M.M. Cecilia was elected Reverend Mother of Baggot Street. S.M. Vincent was appointed Mistress of Novices, an office she held for five years. It was during this time that the first foundation was made to Australia (Perth, 1846). Letters from the young foundation Sisters to their novice mistress make poignant and interesting reading.

On the death of M.M. Cecilia Marmion in September 1849, S.M. Vincent, at just thirty years of age, was elected Reverend Mother of Baggot Street, a position she held until May 1855, when she was elected Mother Assistant and later that year again appointed Mistress of Novices. She filled these positions until she departed for Brisbane.

M.M. Vincent’s years as Reverend Mother were creative and energetic; much of her attention was devoted to the more mundane aspects of the young and growing Order – such as neighbours and rent, the chaplaincy issue with Dr Walter Meyler who in a moment of exasperation declared to her “it is not easy to soften the hearts of Wexford nuns.”[1]

Although these years were a time of great expansion of the Sisters of Mercy, during this period only three foundations were made from Baggot Street itself, but these were significant foundations – Loughrea (1850); Blandford Square, London (1851) and Belfast (1854).

Another important decision taken during this time was the supervision of the nursing of the Jervis Street Hospital in Dublin (1854) – an association that was to last 129 years. At the same time, M.M. Vincent was anxious to establish a Mater hospital in Dublin. In 1851, she purchased the land in Eccles Street on which to establish Dublin’s Mater which opened on 24 September 1861, a few months after M.M.Vincent’s arrival in Brisbane.

It was also Mother Vincent who in 1854 called for volunteers from amongst the Sisters of Ireland and England to nurse sick and wounded soldiers in the Crimea. There a group of sixteen sisters, one of whom was her own sister, S.M. Agnes (Anne) Whitty, another S.M. Elizabeth Hercy, ministered under the leadership of S.M. Francis Bridgeman of Kinsale. They worked alongside another group of Sisters of Mercy led by M.M. Clare (Georgiana) Moore of Bermondsey and under the supervision of Florence Nightingale.

But M.M. Vincent’s own call lay elsewhere. In mid-November 1860 M.M. Vincent declared to Reverend Mother Mary of Mercy Norris that her “wish for a mission is not the feeling of a moment but the steady desire of 20 years.” [2] Bishop Quinn having overcome the reluctance of the Baggot Street community to release M.M. Vincent from their midst, set sail with her as “Mother Superior of the new foundation”[3] and another five sisters, leaving Liverpool on 8 December 1860, bound for Brisbane.