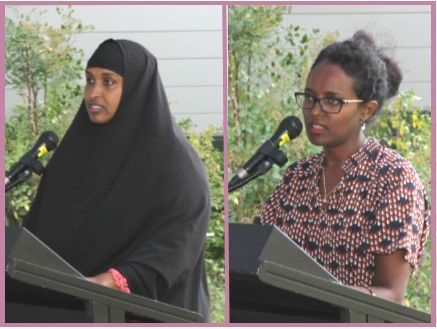 Gathered on the shaded Aubigny lawn on International Women’s Day, surrounded by buildings reflecting the rich history of the site and looking directly at the etched memorial of those Sisters who have served here over all the years, we celebrated the ten years growth of one of Mater’s more recent shoots – the Refugee Maternity Service. From the gracious introductory speech by Maree Reynolds, Director of Nursing and Midwifery Health Services, the personalised welcome to country by Kiana Charlton and the general buzz of excitement around those present, we knew we were going to experience a splendid morning.

It was in 2005 that, having identified an unmet need, the Social Work department through one of their staff, Kate Ramsay, approached the Sisters of Mercy under the then leadership of Sandra Lupi and team for assistance in establishing a service that would cater for the needs of mothers –to-be from refugee backgrounds.  As one of the refugee women speaking at the 10 year celebration remarked, it is hard enough to be making a new life in a new country with a strange culture but facing birth in a very different hospital environment is another step up in challenge.

Several years of preparation, planning, developing a multidisciplinary team followed under project officer, Jennifer Ryan, assisted by Refugee Health expert Associate Professor Ignacio Correa Velez, now the Co-CEO of QPASTT (the Queensland Programme of Assistance for Survivors of Torture and Trauma), by representatives  from all relevant departments - medical,  midwifery, social work and most importantly from the ethnic communities. The Refugee Maternity Service began in 2008 under the initial team of clinical midwife, Michelle Steel, social worker, Cassandra Dove, and Obstetrician-gynaecologist, Dr Di Poad.  This was the first dedicated Refugee Maternity Service established in Australia.  Over the years the team has contributed to various conferences here and abroad, provided lectures to tertiary institutions from both the midwifery and social work perspective, helped develop state-wide guidelines, research, policy drafting and evidence-based practice changes. And most vitally has provided services availed of by over 2,500 refugee women from a wide range of countries.

Most powerful words from hearts full of gratitude and joy came from those mothers who had had their babies through the service. Strong relationships of trust and confidence were built between midwife and pregnant woman – a key to this was the ability to see the same midwife and interpreter throughout the antenatal and postnatal periods.  In addition the midwife was contactable 24/7.  After the birth the midwife was able to do much appreciated home visits rather than have the mothers, as one mother remarked, bring their often large families to the clinic.  Having the same staff members - midwife and interpreter - meant that the stress caused by having to repeat their story over and over was avoided.  Another valuable factor in the clinic’s care was that the women were not rushed but given all the time needed.  Information on health matters, as for example pelvic floor strengthening and breast feeding, was given in a timely, gradual way, well before the birth.

The overriding impression left from the morning was that here was a service that is wonderfully answering a crucial need, bringing people together, giving great satisfaction to all - to the mothers whose anxieties are lessened and whose children enter the world in the best possible way and to the staff who wholeheartedly commit to their work which rewards them a hundred-fold.  Several of those toddlers born at the Mater were enjoying their time on the Aubigny lawn and babies had plenty of willing nursemaids among visitors and staff.  Their mothers are making their way in their new home, too. In talking with some of those present at the delicious morning tea, I met a woman from Libya with a very young daughter who has just gained her Masters in Applied Linguistics.  Another from Somalia whose own mother, herself a midwife of many years practice, supervised her daughters side-by-side with the Mater midwife engaging in an exchange of professional ideas.  This young woman is just one placement away from gaining a Social Work degree. A third from Eritrea is both a recipient of the Maternity Service and one of its   registered interpreters.

Tribute was paid to all members of the multidisciplinary team, to the social workers, including Cassandra Dove, who has been with the Service since its inception, in their role of enabling, strengthening and advocating for the women and families, to the interpreters who in serving their communities are essential to the success of the work.

This service is a wonderful example of collaboration through many stages by many people, in which the Sisters of Mercy had a supportive part, to bring to fruition an outreach in true response to the Catherine McAuley call to be present to a vulnerable group in our community.

In concluding her speech, after having thanked all those who have made the service possible, midwife Michelle Steel, also with the service from its very beginning, reserved the greatest tribute for those refugee women from so many countries who have been part of this 10-year journey and who enrich so deeply those who accompany them:

“But mostly, I would like to thank the women we have served for allowing us into the most private times of their lives.  You shared with us so many things and we, as clinicians, have learnt many valuable lessons from you.  You have ever so gently, and with the greatest of dignity, corrected us when we do something culturally inappropriate.  You have demonstrated, on a daily basis, depths of courage, strength, love and commitment to family life and culture.  You show us how to get back up on our feet when we are challenged, dust ourselves off and continue to put one foot in front of the other and move on with our lives.  You have shared the stories of trauma, torture, loss and pain, which, by simply the luck of where I was born, I/we will never be able to understand.  But ultimately you have taught us about trust and faith.  You have given the Refugee Maternity Service your trust, and it is our privilege to continue to serve you, within that trust.  You show us your faith, that God or Allah, has a plan for us all and that we merely work within that plan.  You have fed us your birth foods, you have performed coffee ceremonies for us, you have anointed us with perfumed oils and nominated us as your village midwife, and have called us sister, auntie, mother and grandmother.  And this is why we do what we do.