Advocates for the International Campaign to Ban Landmines, Tun Channareth and Song Kosal are both landmine survivors who call everyone to lend their legs to support Landmine Campaign. 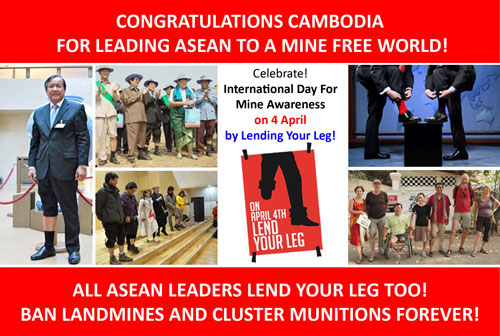 Around the world, there will be a global "Lend your Leg" campaign to raise awareness about the ongoing landmine problem and to show solidarity with people injured by landmines and UXO's. The global message is to "Lend your Leg for a mine free world" and each country will adapt the campaign to their national needs. Here in Cambodia, we want everyone to step forward together and "Lend your Leg" for:

Too many unnecessary deaths and injuries continue to haunt Cambodia. We need landmines and cluster bombs out of the ground now so that Cambodians can walk freely in the rice fields. Victim Assistance must be implemented effectively and at a grass roots level to ensure survivors lives improve. Cambodia led the Mine Ban Treaty but has not yet joined the Cluster Munitions Treaty. Currently, 111 countries have joined the Treaty and there are 70 States Parties to the Treaty (26/04/12). Come on Cambodia! Let's join too!

The campaign is inspired by the successful "Remangate" ("Roll Up") campaign in Colombia of April 2011which, through the use of social media, celebrity endorsement and support from NGOs, the government, media, and international agencies, became known country-wide.

This year, ICBL and the United Nations Mine Action Service (UNMAS) are partnering with Fundacion Arcangeles to help the campaign go global.

In order for the campaign to be as successful as possible, we need YOUR help. We hope that everyone, government, media, NGOs and civil society, will lend their leg and participate to make this a truly memorable month.