A special installation ‘Recognition Place’ in the grounds of St Vincent’s Convent, Nudgee which acknowledges and honours the First Peoples of Southern Queensland was opened on Wednesday 10 December 2014.

The ceremony to officially ‘open’ Recognition Place at Nudgee marked the end of a long journey.  In the second half of 2006, a group of Brisbane Sisters participated in a process organised and led by Aboriginal woman, Kerry Charlton, titled ‘Finding Ways Forward with Aboriginal Reconciliation and Healing Pathways’.  During the final session on 18 November 2006, one of the follow-up actions that surfaced was:

“on the Mercy land at Nudgee currently being developed, to install a permanent symbol of recognition of the original custodians, which would serve as a focus for reflection and prayer for the process of national reconciliation”.

The path towards fulfilment of this vision took many twists and turns, including the search for a suitable site.  In the end, the ideal location under the stately bunya palms at the entrance to the convent was secured.  A key gathering in 2009 of Sisters, Aboriginal women consultants and Mercy Family Services staff generated symbols and concepts to shape the artistic work. Gifted Aboriginal artists Laurie Nilsen and Debbie Taylor crafted these into the installation that now graces the space. 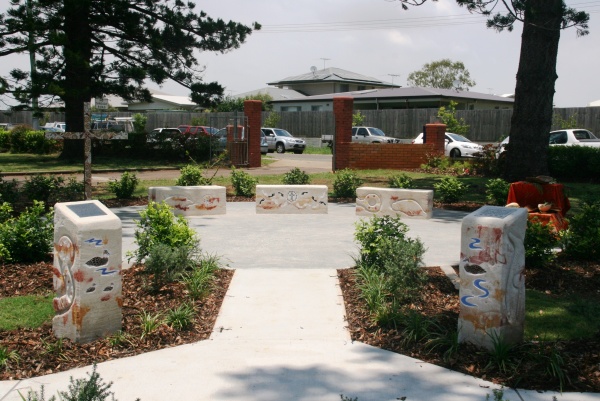 “The five pieces produced for this project depict various sites, artefacts and sea life from the local area.

Carved white cement, oxide and handmade ceramics were used to produce these pieces.

The blue tiles on the back of the seats depict the river and waterholes used by the local Aboriginal people.

Artefacts  such as boomerangs, nulla nulla, bull roarer and stone axe are carved on the bollards with ceramic duck inlays.

Two circles joined by a path depict the local bora ring and the single circles represent various camp sites of the local groups.”

Reflections below are from two of the participants at the opening ceremony.

"The spirit of the ancient peoples, who walked for thousands of years on the sacred land, ‘nar-dha’ country, was experienced this morning in the whispering of the Bunya trees; in the smell and wafting of the healing smoke; in the cool breeze; and more particularly in the aboriginal people who gathered with the Sisters of Mercy and partners in Mercy to celebrate and dedicate this very special ‘Recognition Place’.   Concrete and ceramic, symbols of Bora Ring, campsites, footsteps, water and images of nature giving us a sense of dreaming, a sense of oneness with aboriginal culture, spiritually walking this ancient land in reconciliation and relationship with each other."

"Sitting next to an elder of the Gubbi Gubbi People under the bunya pines and listening to the buzz of anticipation of all those awaiting the ceremony to acknowledge and honor the First  Peoples of Southern Queensland through  Recognition Place, Nudgee, past personal connections came to mind. The stories of happenings on our farm - the mounds said to be Aboriginal graves, the Bora Ring in the district, the earlier gatherings of tribes for the feast of nuts on the Bunya Mountains, teaching in a northern town with one of the very first state trained Indigenous teachers… our often troubled personal, family, congregational or national shared history calls for reflection.

We are aware of a focus on Closing the Gap- in health, education and employment - but the gap in our knowledge and appreciation of the First Peoples’ presence in and care for this land also invites our attention.

Recognition Place with its evocative creations of the respectful interaction between people and of their physical and spiritual connection with the natural world will be an inspirational reminder to all to reflect, to dialogue, to act. As our nation moves to recognize the First Peoples, our task will be to put flesh on the words of the Constitution.

How much richer will our true Australian story be when we can look back beyond the past couple of hundred years to share and celebrate the millennia of human presence in this land through the oldest living culture in our world." 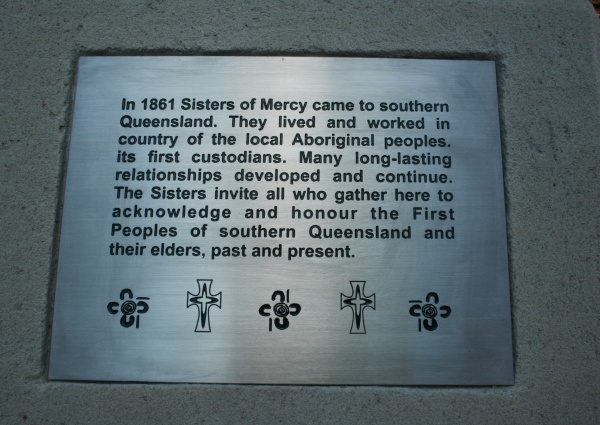