Last Thursday, a small group of All Hallows’ students and staff members attended the Schools Vigil outside the Lady Cilento Hospital in support of the action taken to advocate for baby Asha not to be sent back to Nauru.  Many Religious Institute schools sent representatives which was chaired by students from Brigidine College and supported by the students themselves speaking about why they were there. The students joined hundreds of people who in some way participated in an eight day  round the clock vigil advocating  for better treatment for people who are refugees or who are seeking asylum in Australia. The very simple message conveyed, beyond advocating for baby Asha and her family, was that the detention centres on Nauru and Manus are not safe, and are not a humane response to a situation facing countries around the world, and should be shut down.  There has to be a better way to stop an already traumatised people experiencing further physical and mental suffering. 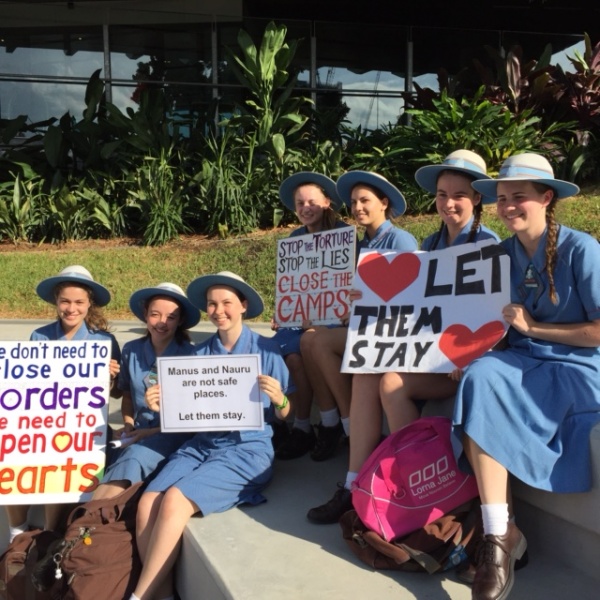 Later that evening a number of staff attended a fundraiser for the Romero Centre (a program run by Mercy Community Services for people with a refugee background).  The guest speaker was Kon Karapanagiotidis, the founder and CEO of Asylum Seekers Resource Council, who was also in Brisbane during the vigils.  Despite the many problems and challenges faced by advocates, Kon’s message was one of hope – a belief in the goodness of people, and a belief that by remaining faithful to values which support the human dignity of each person, and compassionate outreach to people who are desperately seeking refuge, change will eventually come.