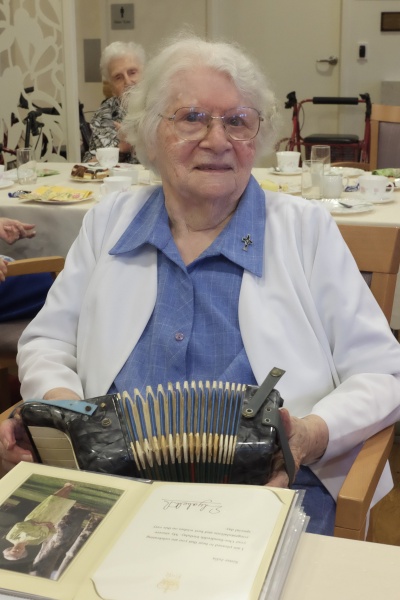 Born in Castletownbere, Co Cork, Ireland on 27 November 1914 Julia Shanahan left her homeland, with twenty seven young Irish women to follow God’s call to serve Him as a Sister of Mercy in the Brisbane Congregation. That was in January 1937. In December of that year, she began her Canonical year in the Novitiate of the Sisters of Mercy. Julia was professed on 14 January 1941 and throughout her seventy-five years of Religious Life, she was known as Sr Maria Teresa. The motto on her Profession ring was “Sacred Heart of Jesus, I trust in Thee”.  With faith and trust in her God, Teresa’s early ministries were in the Convents at Maryborough, Roma, All Hallows, Rosalie, Bowen Hills, and Bundaberg.  During these appointments between 1939 and 1966, she was either Housekeeper or Cook, and in some places, both.

In 1967 Teresa moved to St Vincent’s Home, Nudgee, where she cared for the babies and very young children for ten years. This was followed by a two year period during which she walked the streets of Sandgate visiting Parishioners and also visiting at Eventide. She began to slow down a little, when she ‘semi-retired’ at St Vincent’s Convent Nudgee between 1980 and 1994. Not until 1995, aged eighty one, did she retire and moved into Age Care – first to Emmaus, then to Mary Damian Cottage and more recently to Bethesda.

Teresa had a great sense of humour and a collection of very witty sayings. She loved poetry and would recite long paragraphs to all who would listen. Another skill was playing her favourite squeeze box for a dance or a good sing along. She was a great entertainer.

A woman of deep faith, she spent many hours in prayer. In recent years, as she sat in her chair, she prayed aloud her favourite aspirations. Over and over she was heard to pray

“Jesus, Mary and Joseph, I give you my heart and my soul,

Jesus, Mary and Joseph, assist me now and in my last agony.

Jesus, Mary and Joseph may I breathe forth my soul in peace with you, Amen”

When God called her home on Sunday 25 September, she slipped away very peacefully in the arms of two carers who loved her dearly. In recent months, since the celebrations for her 100th Birthday, she often said “God has forgotten me.” Now she is with her God – the God she has known and loved for nearly one hundred and two years, seventy five of those years as a Professed Sister of Mercy.

Mass of Christian Burial to celebrate her life was held on Friday 30 September at St Vincent’s Chapel, Nudgee followed by her burial at Nudgee Cemetery.