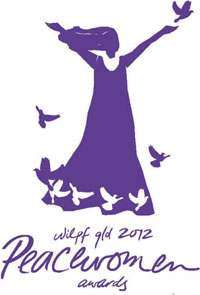 On Friday 27 April, Wendy Flannery was among those recognised in the Peace Women Awards by the Women’s International League for Peace and Freedom (WILPF), the oldest women’s international peace organisation. In the five-year lead up to its centenary in 2015, WILPF has had an annual awards ceremony, recognising local women who have contributed in a variety of ways to peace building. 2012 was the third such event in the series.

The following is an extract from the citation that appeared in the program for the awards event:

“In a career spanning over forty years, Wendy Flannery, a Brisbane Sister of Mercy, has consistently demonstrated both a deep commitment to peace building and an extraordinary talent for bringing together disparate people and building bridges across cultural, racial and faith divides.

Wendy’s character comprises a rare blend of the thinker, analyser, planner, inspirer and doer. She has the capacity to be both a warm, supportive and loyal friend at the local community level and a powerful advocate on the international stage. Above all Wendy is a networker par excellence. Wherever she has worked, it is evident that this is a salient feature of her peace building practice.

Trained as a secondary school teacher, Wendy began her working life as a staff member at All Hallows’, Brisbane, but soon, in 1969, she left to teach in Papua New Guinea. With an appointment in 1978 to the Melanesian Institute, an ecumenical research and teaching institute in PNG, Wendy began an enduring relationship with the peoples and countries of the Pacific which was extended in 1984 when she was appointed executive officer of the Commission for Justice and Development of the Catholic Bishops’ Conference of the Pacific Islands (CEPAC), based in Suva, Fiji, and encompassing 19 Pacific nations and territories.

In this capacity, Wendy worked throughout the Pacific in education, training, awareness-raising and advocacy on local and regional justice, peace and development issues. She particularly fostered ecumenical relationships between Pacific Island women’s groups and supported them with training and access to resources.

From 1999 to 2002 she represented the Mercy International Association in its capacity as an NGO to the United Nations in New York. In this role she was committed to action on issues such as poverty eradication, sustainable development, economic justice, Indigenous peoples’ rights, gender justice and women’s empowerment, and the elimination of racism.

Since her return to Brisbane at the end of 2002, Wendy has continued her peace building work, focussing particularly on empowering women, promoting interfaith dialogue and raising awareness on environmental issues such as climate change and sustainability. The principles of justice and respect for the person underlie all her endeavours.”

Among those present at the awards ceremony to celebrate with Wendy this well-deserved honour were members of her family, her religious congregation and the interfaith group that she was instrumental in founding, Believing Women for a Culture of Peace.

There were two other individual awards this year:

One went to Good Samaritan Sister Pauline Coll, especially for her role in establishing ACRATH (Australian Catholic Religious Against Trafficking in Humans), to work to abolish trafficking in humans and defending the rights of women and children.

The other went to Karen O’Donohue, the manager of Anglicare’s INSYNC Youth program at Cleveland, building on her key role in the Alternatives to Violence Project – Queensland (AVPQ).

The Committee of the Warwick Peace Festival received a group award. Wendy and Mia Leigh, the then chairperson of Believing Women for a Culture of Peace, attended the first festival in 2005 and enjoyed the hospitality of  Sr Margaret Murphy. Among the Festival’s Committee members was Helen O’Brien, a staff member of Mercy Family Services Toowoomba.

The art work for the 2012 Peace Women Awards was designed by Joy Hinckley to illustrate the theme of “Resilience”. In Joy’s words, this implies a bouncing back:

The symbol is a woman:

There is a gesture - a stepping forward, hands raised - which is often used by people to express the feeling of having overcome, survived, succeeded, finding the energy and will to remain engaged and committed. A physical “YES”.